Today, a standard toilet uses 1.6 gallons per flush or GPF. For the average person, this adds up to about 9.1 gallons of water being flushed away each day. That might seem like a lot of wasted water, but it’s nothing compared to the toilets in years past. Our current standards were made in 1992, but prior to that, toilets used twice as much water, washing down 2.5-3.6 GPF.

The further you look back, the worse it gets. Toilets made before 1980 used a whopping five to eight gallons with each flush. That adds up to around 48 gallons of water being used each day by each person just to go to the bathroom!

But our current standard was made nearly two decades ago, certainly, there’s a more economical solution by now, right? Indeed, there is; 1.28 GPF toilets. Let’s compare them to 1.6 GPF toilets and see if it’s an improvement or if we’re better off at 1.6 GPF.

In basic terms, a 1.28 GPF toilet is pretty much the same as any toilet you’ve ever used. You’d never be able to tell the difference just by looking at it or using it because all of the differences are internal.

So, if it feels and looks the same, what’s the difference? Why bother getting a 1.28 GPF toilet at all? 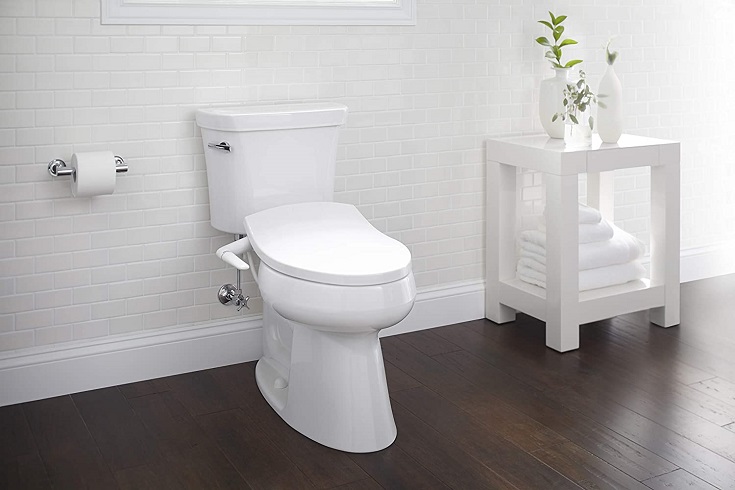 The draw of a 1.28 GPF toilet has nothing to do with differences in use or appearance or anything like that. As mentioned, the differences are all internal. You won’t see these differences when looking at the toilet, but you might notice them on your water bill!

A 1.28 GPF toilet uses about one-third of a gallon less with each flush than a standard 1.6 GPF toilet. So, how does that add up to real-world water conservation? Well, the average American flushes the toilet about five times per day, which accounts for approximately one-quarter of their daily water usage.

Do the math and you’ll see that a 1.28 GPF toilet saves close to two gallons of water per day for the average person.

Now, consider the size of your household. You might be the only person in your home, but there are other homes with five family members or more. In a house of five, a 1.28 GPF toilet could potentially save about 10 gallons of water each day. Extrapolated for the entire year, that’s about 3,650 gallons of water saved. Multiply that for the decade and you start to see the real advantage of a low-flow toilet.

Is It Still Conservative if You Have to Flush Twice?

But it’s not all sunshine and rainbows! There are downsides to the lower-volume flushes of a 1.28 GPF toilet. The big one is the extra mess! When you’re not using much water to wash down the waste, some of the waste won’t wash down.

Especially when dealing with solid waste, larger loads aren’t always getting washed down with a single flush. And because of the limited water used in a flush, skid marks seem to become a regular occurrence.

If your waste doesn’t flush nicely, you can always flush again. But then you’re actually using 2.56 gallons, which is more than a standard 1.6 GPF toilet uses.

Luckily, many manufacturers have noticed this problem and they’re doing something about it. Several toilet makers have come out with special power flushes that are intended to make the most out of the limited volume of water. Some of these do a pretty decent job, but there’s still some room to improve as many of these still leave parts of the bowl untouched.

The other benefit of a low-volume flush is that it’s quiet. This may not seem like a big deal, but a loud flushing toilet can easily wake up other members of the household at night. Likewise, a toilet with a loud flush can scare kids who are just learning to use the toilet.

If you’re alive in America today, you’ve certainly used a 1.6 GPF toilet at some time as these have been the standard since 1992. In terms of looks, appearance, and how you use it, there’s no discernable difference between a 1.6 GPF toilet and a 1.28 GPF toilet. But internally, the 1.6 GPF toilet is using quite a bit more water.

It’s A Matter of Volume

As mentioned, the only real difference here comes down to volume. Volume of water and the audible volume of the flush.

A 1.6 GPF toilet uses substantially more water each time you flush the toilet. Not only is that hurting your water bill over time, but it’s also a waste of precious natural resources. In the last section, we determined that the average person in America could save about two gallons of water each day by using a 1.28 GPF toilet instead of a 1.6 GPF toilet. If we multiply that two gallons by the more than 320-million people in the U.S., we could be saving more than 600-million gallons of water EACH DAY as a nation by switching to these more conservative toilets.

A much less important reason to make the switch is the audible volume of the flush. A 1.6 GPF toilet is noticeably louder when it flushes than a 1.28 GPF toilet. While this may only really matter to toddlers and anyone who’s room is close to the bathroom, it’s still worth mentioning.

You Get a Better Flush

While a 1.6 GPF toilet does use more water, the real question is whether that water is wasted or put to good use. Unfortunately, that’s going to be a matter of personal opinion. What’s the net impact of saving a gallon of water? That’s difficult to quantify. But the impact of a quality flush is much easier to notice since you won’t have to see those nasty skid marks in your toilets.

A better flush literally saves you time since you’ll be spending less time cleaning out your toilet bowl. As far as cleaning jobs around the house go, the toilet seems to be most people’s least favorite, so we’re all for anything that helps us avoid that chore. But it’s a tradeoff that you have to consider.

How Much Water is it Really Wasting?

We did the math and determined that a single person could be wasting about two gallons of water each day with a 1.6 GPF toilet. But what if we look at this from a different angle?

Since the average person flushes the toilet about five times per day, we’ll use that number. 1.28 GPF multiplied by five flushes equals 6.4 gallons of water used in a day. But let’s say that out of five uses in a day, the 1.28 GPF toilet needed double flushing twice because there was mess leftover. That brings the total water usage up to 8.96 gallons.

Now, let’s look at the 1.6 GPF toilet, which we can assume didn’t require double flushing at any point because of the more powerful flush. 1.6 gallons multiplied by five flushes equals eight gallons of water, which is less than you’d use with a 1.28 GPF toilet if you had to double flush it.

The real question is; how heavy of a toilet user are you?

The way we see it, this decision boils down to whether you’d prefer to save time or save water. If saving water, lowering your water bill, and minimizing your impact on the environment are more important to you, than you’d be best served by a 1.28 GPF toilet.

On the other hand, if you’d rather save time and avoid having to clean the toilet more often than necessary, you’ll probably be better off with a 1.6 GPF toilet that you won’t have to get as well-acquainted with since it won’t need as much scrubbing. 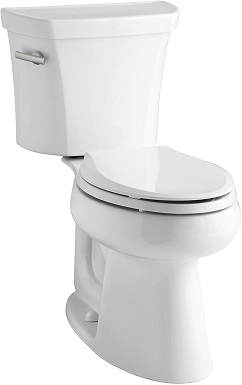 Equipped with class-five flushing technology, the Kohler K-3999-0 Highline Comfort Height Toilet aims to fix the biggest problem associated with 1.28 GPF toilets; the weak flush. This toilet uses a larger flush valve to evacuate the water faster, making more out of the low volume of water. As such, it leaves the bowl much cleaner than other low-flow toilets.

Despite the great performance, this toilet is reasonably priced, though you’ll have to purchase a seat yourself since it doesn’t include one. 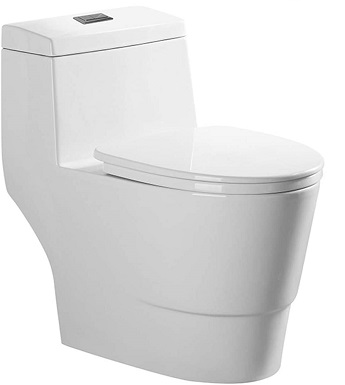 The WOODBRIDGE T-0019 Cotton White Toilet gives you the best of both worlds with a dual-flush mechanism that lets you choose between a more powerful 1.6-gallon flush and a super-economical one-gallon flush for liquids. It’s a one-piece design with no crevice between the tank and bowl to hold onto filth.

This is a very attractive toilet with smooth sides and hidden traps for easy cleaning. It’s even priced affordably. The only thing we weren’t thrilled with is the loud flush.

At the end of the day, the difference between a 1.28 GPF toilet and a 1.6 GPF toilet is pretty minimal; 0.32 gallons to be precise. While it can add up over time, you might actually end up wasting more water with a more conservative toilet if you need to flush it twice or clean it more often than another toilet.

If you have a big household, you might save more water than a single person living alone, so the savings on your water bill might warrant the switch. Likewise, if you’re ultra-concerned about your effect on the environment, go for the 1.28 GPF toilet.

But if you’d prefer not to spend much time cleaning skid marks from your toilet bowl and the louder flush doesn’t bother you, you might be better off with a 1.6 GPF toilet.