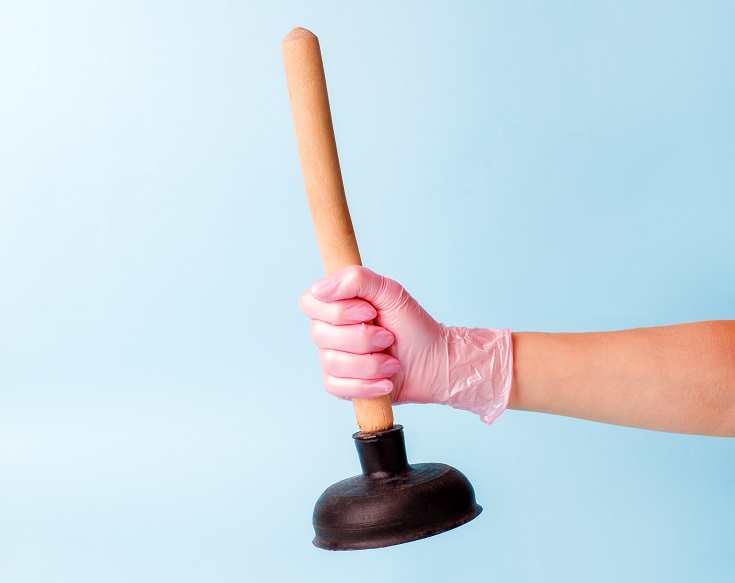 When you suffer a drain clog in your sink, it’s easy to feel helpless. Maybe you don’t think you’re very good at DIY repairs, or you’ve tried every trick you know, and nothing works, or maybe you’re too grossed out by the thought of the clog to even get near it.

You might lament to yourself: “Why can’t I just plunge out my sink the same way I use a plunger to unclog my toilet?” If you’ve ever said that, we’ve got good news — you can use a plunger to clean blockages out of your sink drain!

There’s a catch, though. You can’t just take your toilet plunger to the sink and hope it works. Sink plungers are shaped differently and used in a different way. In fact, many people use plungers for toilets that are actually sink plungers.

In this article, we’ll teach you how to recognize a sink plunger, why it’s very bad to get sink and toilet plungers mixed up, and how to use it to get your sink working again fast.

How to Spot a Sink Plunger

It’s all in the flange.

You might have used a toilet plunger that has a solid rubber piece attached inside the cup. That’s the flange. Flanges can take a few different shapes, but they all have the same function: sealing the end of the drainpipe in order to more effectively apply force to the blockage.

It also keeps the plunger from turning inside out and filling up with toilet water. If you’ve ever had that problem with a toilet plunger — that every few thrusts, you had to turn it right-side out again, splashing dirty water everywhere in the process, then congratulations: you were actually using a sink plunger.

Sink plungers do not have a flange. They’re designed to form a seal on a flat surface using suction, and need to be flexible, since not all sinks are the same shape. This does, however, mean that they can also be used to unclog bathtub and shower drains.

Why You Should Have Separate Toilet and Sink Plungers

Sink plungers, as we’ve established, are not effective as toilet plungers. Without a flange, they can’t seal the hole as well, and mostly just trouble the waters without moving the blockage.

However, you will then be using something you’ve dipped repeatedly in toilet water to clean something much closer to your face. Unless you regularly sanitize your toilet plunger — in which case we salute you — then it’s going to get disgusting.

How to Unclog Your Sink With a Sink Plunger

Almost everyone has used a toilet plunger, but when it comes to blocked sinks, tubs, and shower drains, most people default to using wire hangers or snakes. While clearing obvious hair and garbage from the stopper with a hanger or pliers is the first thing you should do, that won’t always fix the blockage. Your next step is to break out the plunger.

Whether you’re unclogging a bathtub or sink, the steps remain the same:

It’s possible that after several cycles, you still won’t have managed to clean out your drain. Be patient if it doesn’t work right away.

If you’ve been trying for half an hour and the blockage hasn’t moved, you might need to proceed to the more drastic step of snaking the drain. Snaking is a demanding and time-consuming process, though, so give plunging a chance to work first.

What to Look For in a Plunger

Whether you’re buying a sink or toilet plunger, look for a handle made of either metal or plastic. Wood feels nice on your hands, but its rough surface provides more places for bacteria to gather and grow.

Drip trays are a must-have accessory for any plunger. You’ve probably seen these — they’re plastic bases for storing plungers when they aren’t in use. Drip trays keep your plungers from dripping soiled water on your bathroom floor and circulate air around them to dry them out for the next use.